This project is quick guide for a toothbrush support to hold your toothbrush and toothpaste.  The support consists of a cylindrical wood cup which has an engraved image on the side.

Making the wood cup it’s a basic turning technique on the lathe so I’d rather focus on the CNC engraving part.This is my first CNC project where I’ll try to engrave a vector image to a cylinder using the CNC 4th rotary ax.

First I’ve created a cylinder block on the lathe, then mounted to the CNC chuck to do the engraving. Once this was done, I’ve mounted the  work piece back to the lathe and turned the central hole. It’s simple as that ! 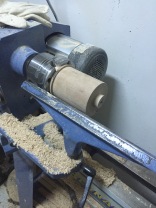 Forgot to mention that after the engraving was done I’ve put some dark oak stain over the image which I’ve sanded down later, hopping to have a better contrast of the shape. Unfortunately this was not the case, if you look carefully the stain destroyed a bit image. Anyway overall the support look good and I’ll do it better next time. 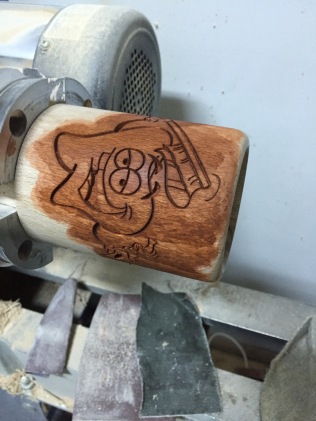 …  after a bit of sanding and finishing …